The Isle of Wight is famous for its Red Squirrels. These cute creatures have been wiped out in most other parts of the UK, apart from here, Brownsea Island (in Poole Harbour, Dorset), some parts of the north of England, parts of Wales and the Highlands of Scotland, due to habitat loss and, quite possibly, the introduction of the Grey Squirrel on which competition for food and also the lethal squirrel pox has been blamed.
Near me, the nature reserve at Alverstone Mead has a population of Red Squirrels which are easy to see due to their lack of fear of people (they get handouts!). This makes them comparatively easy to photograph, although you only need a wide angle lens because they come close...and I mean close, literally only a couple of feet away. The only problem is the darkness created by the wooded environment and the contrast caused by deep shade and bright light on a sunny day like today. I used my 6D with 100-400mm lens - which was overkill - and had to use ISOs in the thousands, hence some grain in the pictures. Next time, I'll use my 70-200mm f/2.8. 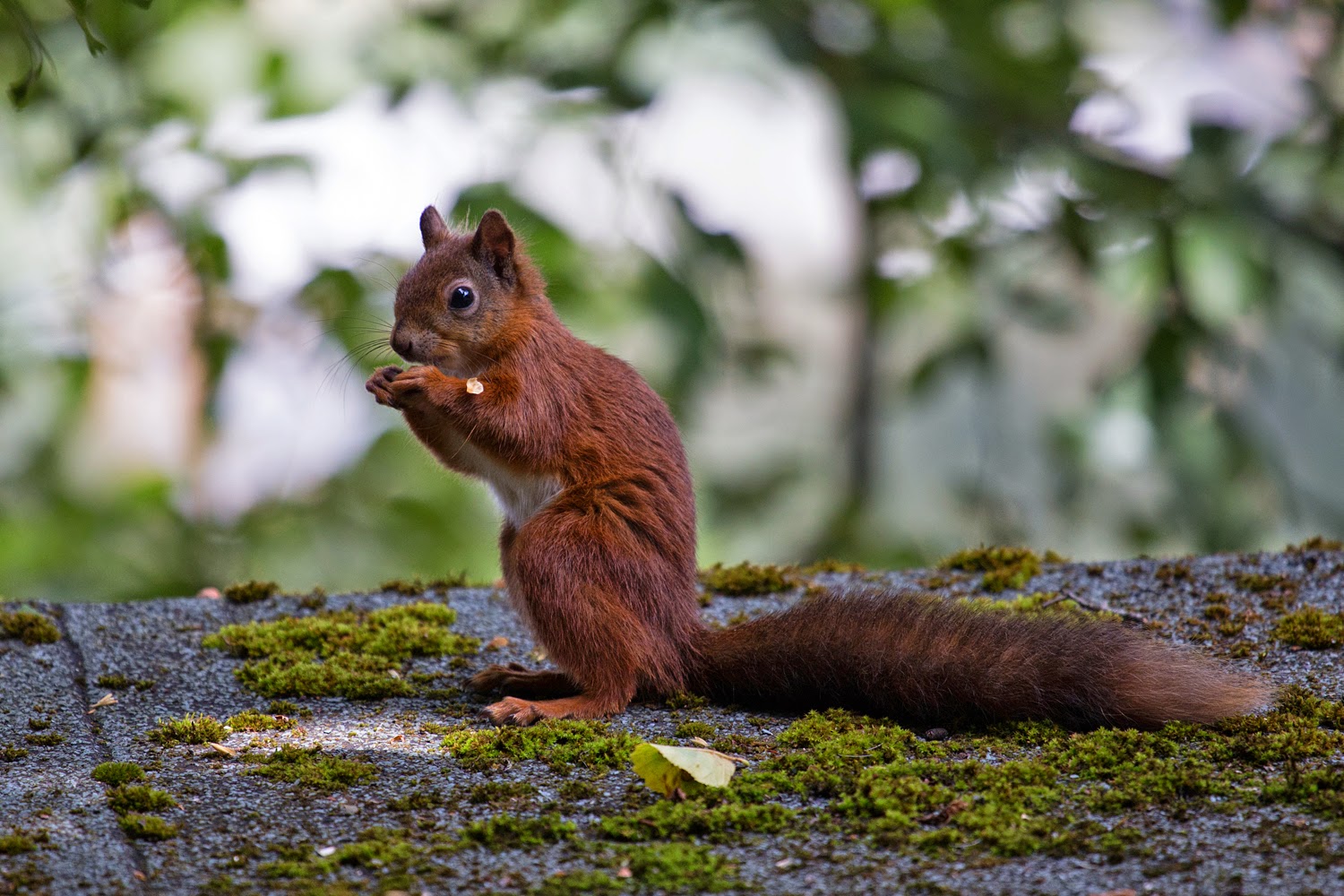 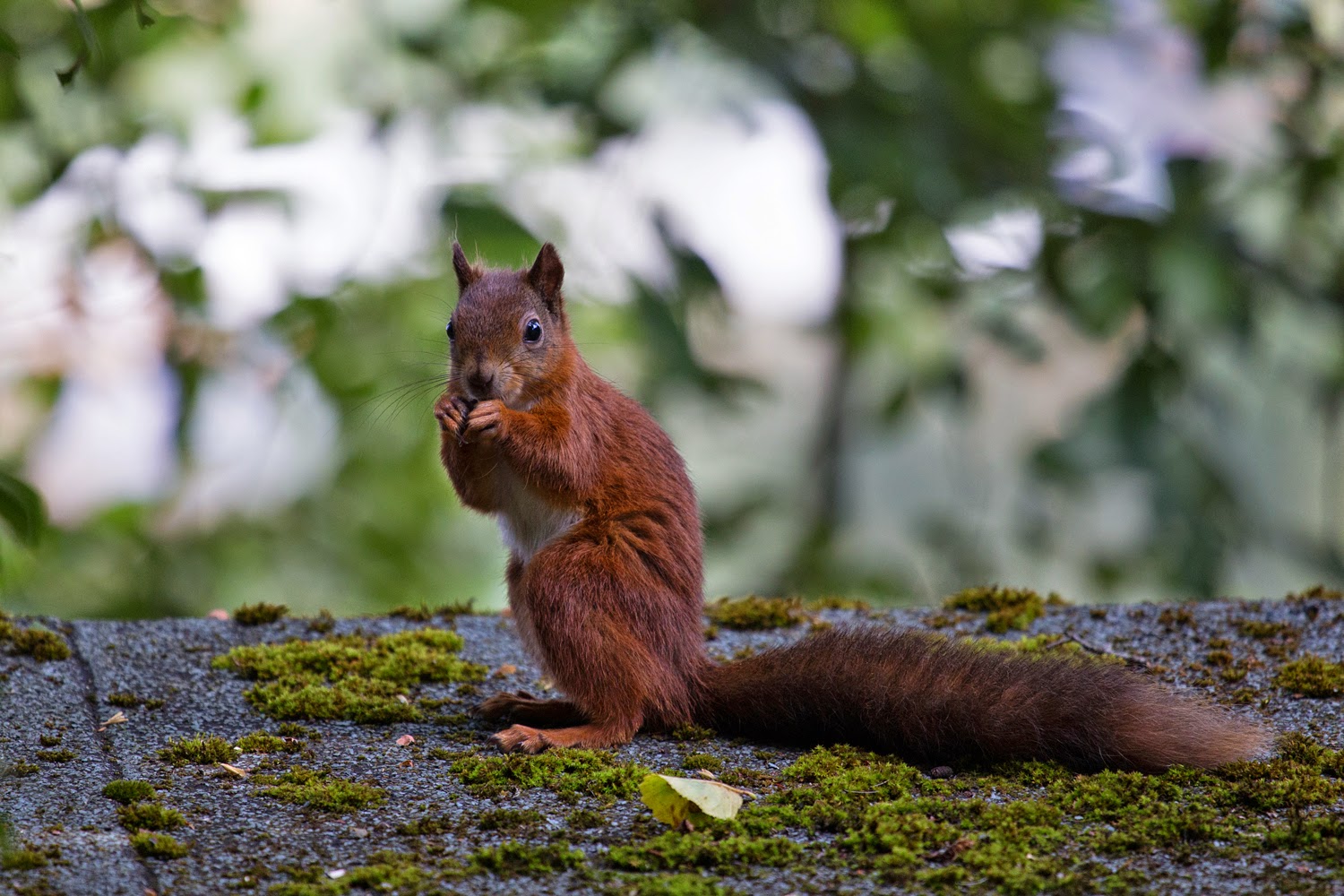 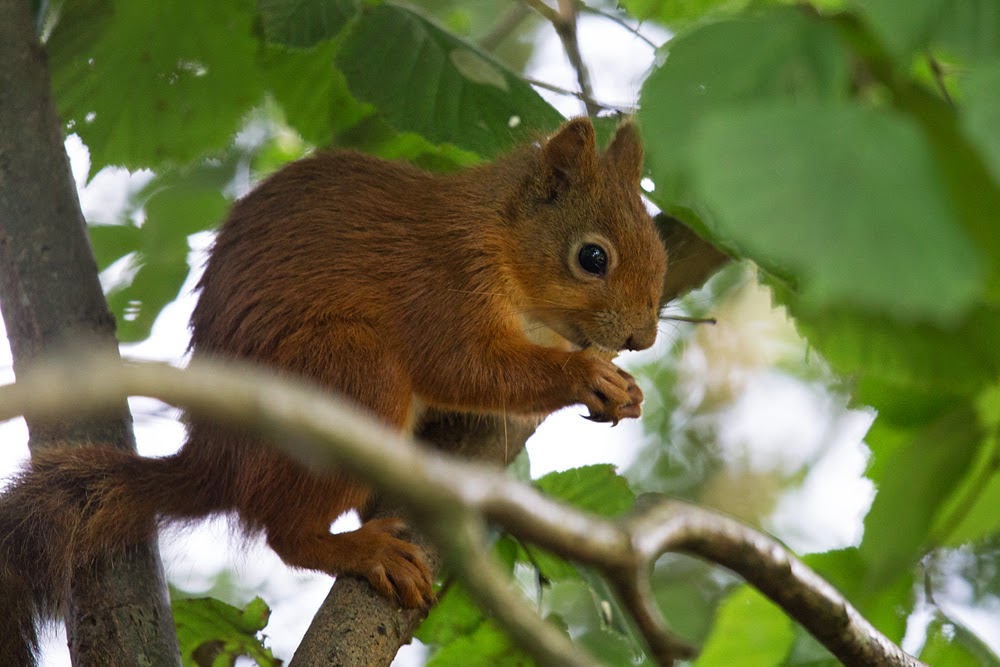 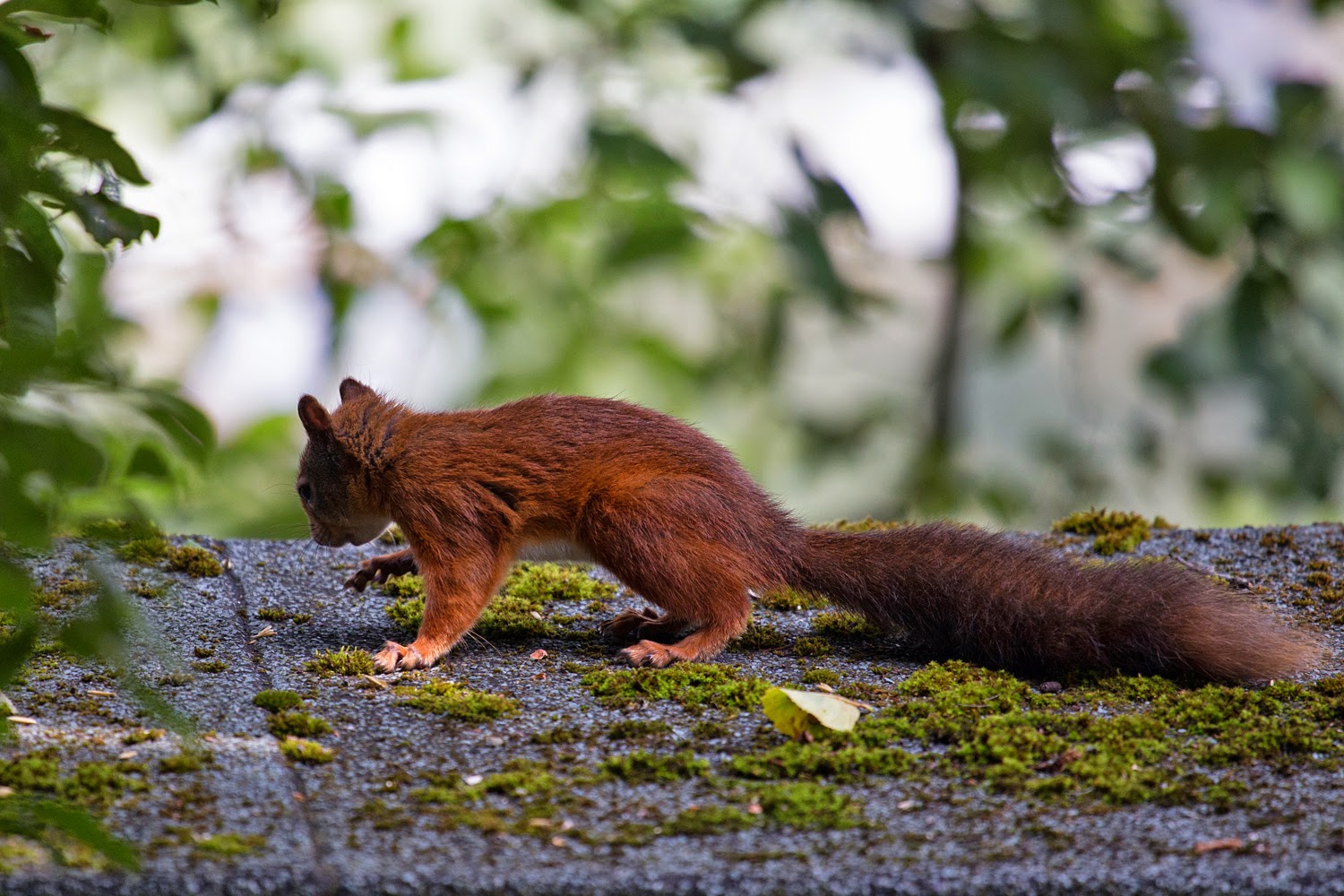 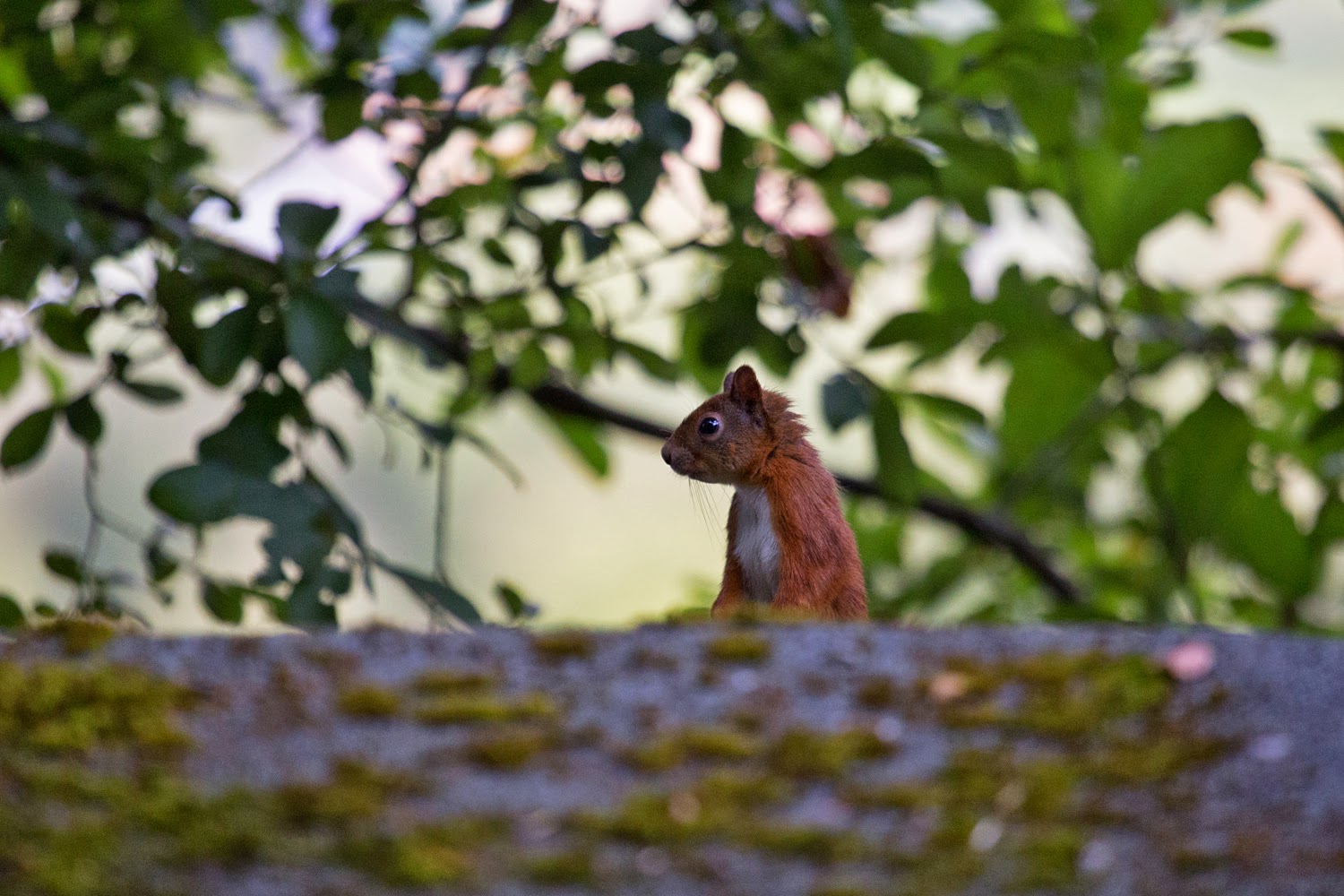 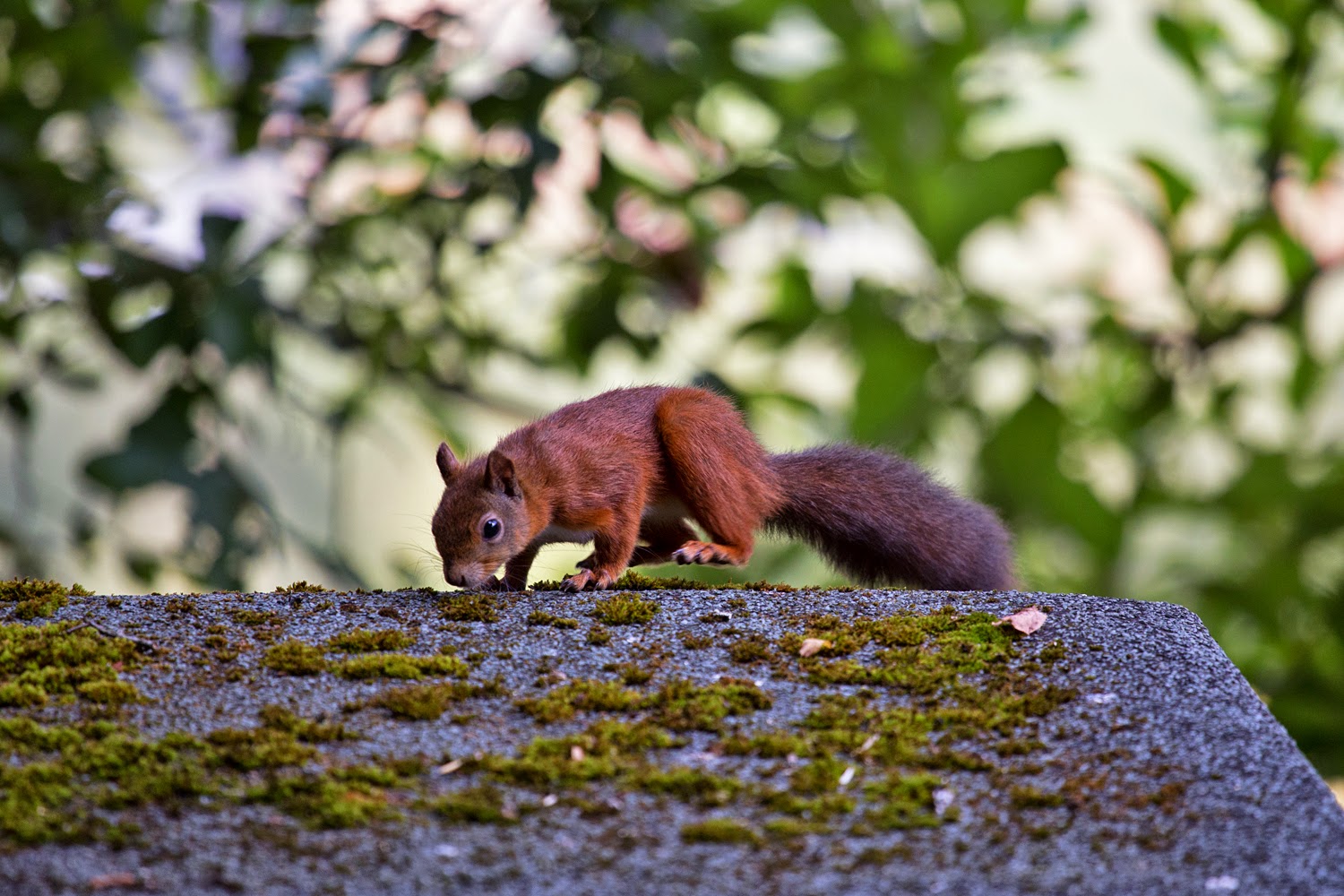 Recently, I received a text saying there were European Bee-eaters paying us a visit here on the sunny Isle of Wight (we're having a decent summer so far, so I hope it's to their liking) and they were to be found at Wydcombe Manor near Whitwell. I couldn't do anything about it until Friday - I don't work Fridays - so I went over then. I got distant views of the birds in a distant dead tree but nothing photographable, until I paid a return visit today, as we're off work for a week. The Bee-eaters were closer, although sometimes still in the distant dead tree, and I managed to get a few shots approaching acceptable.

I've done nothing to these photos except apply a MASSIVE crop (chucking away a good 90% of the original file). Click to see the full sized photos, which are 100% crops. 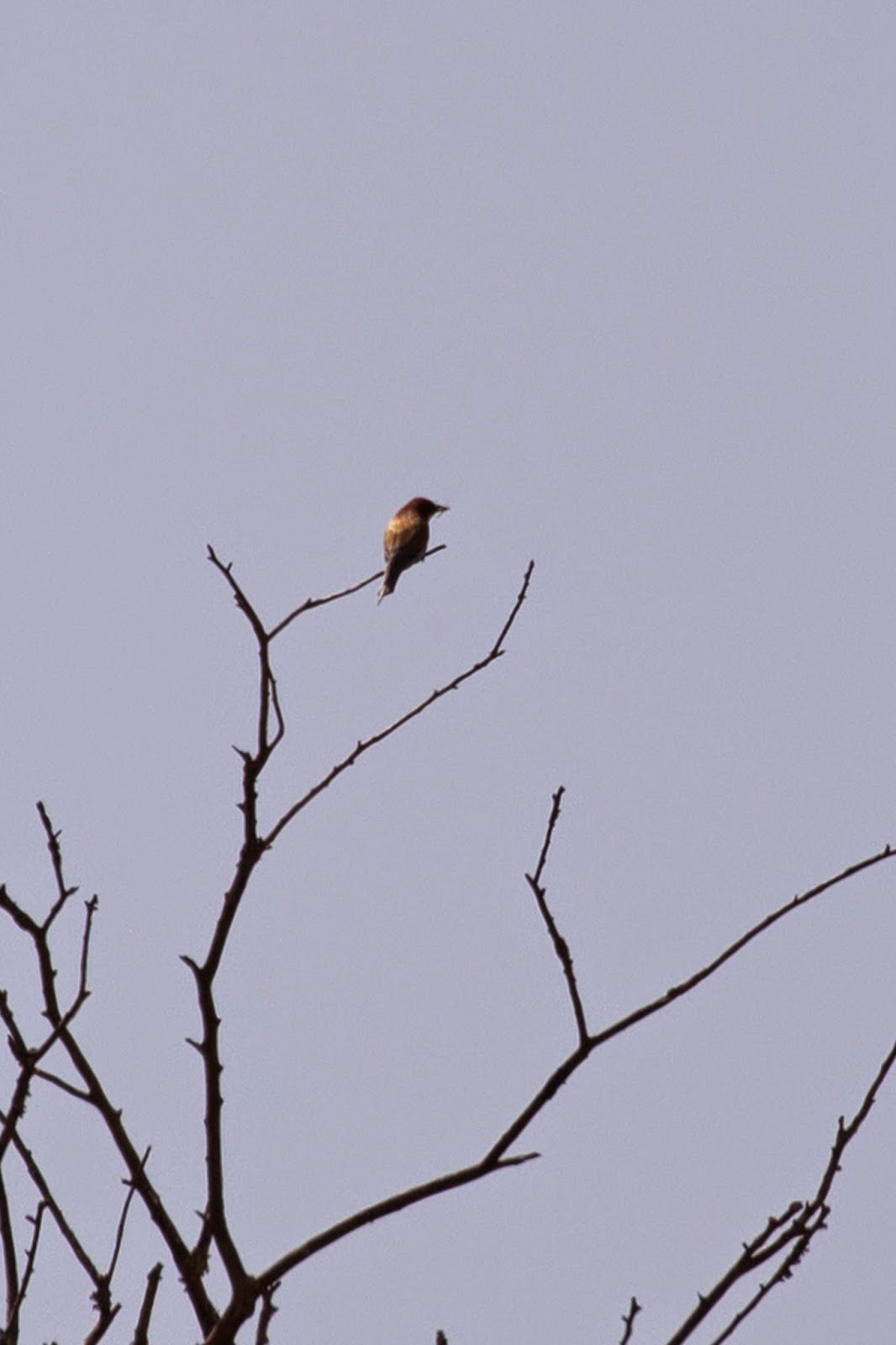 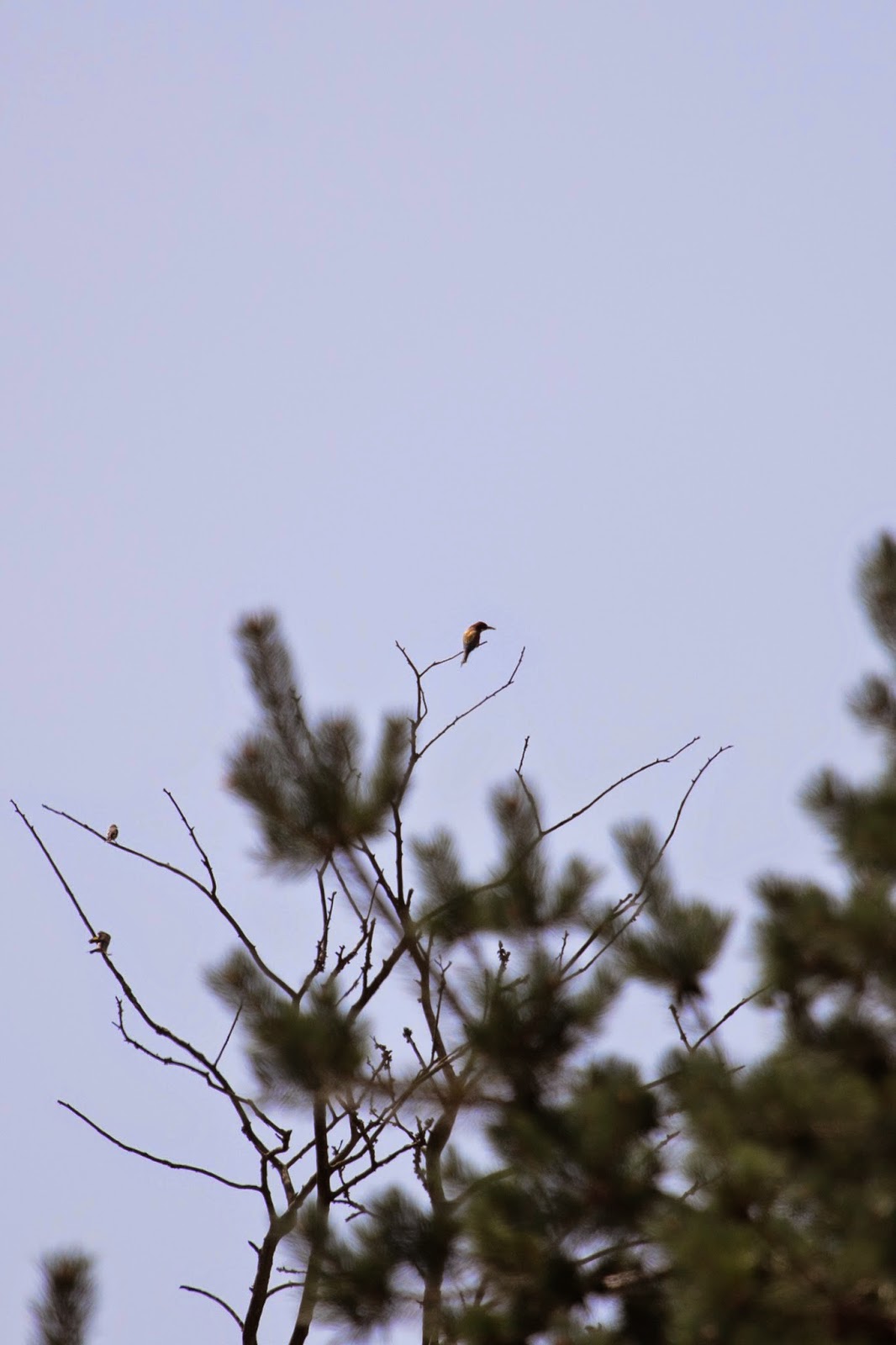 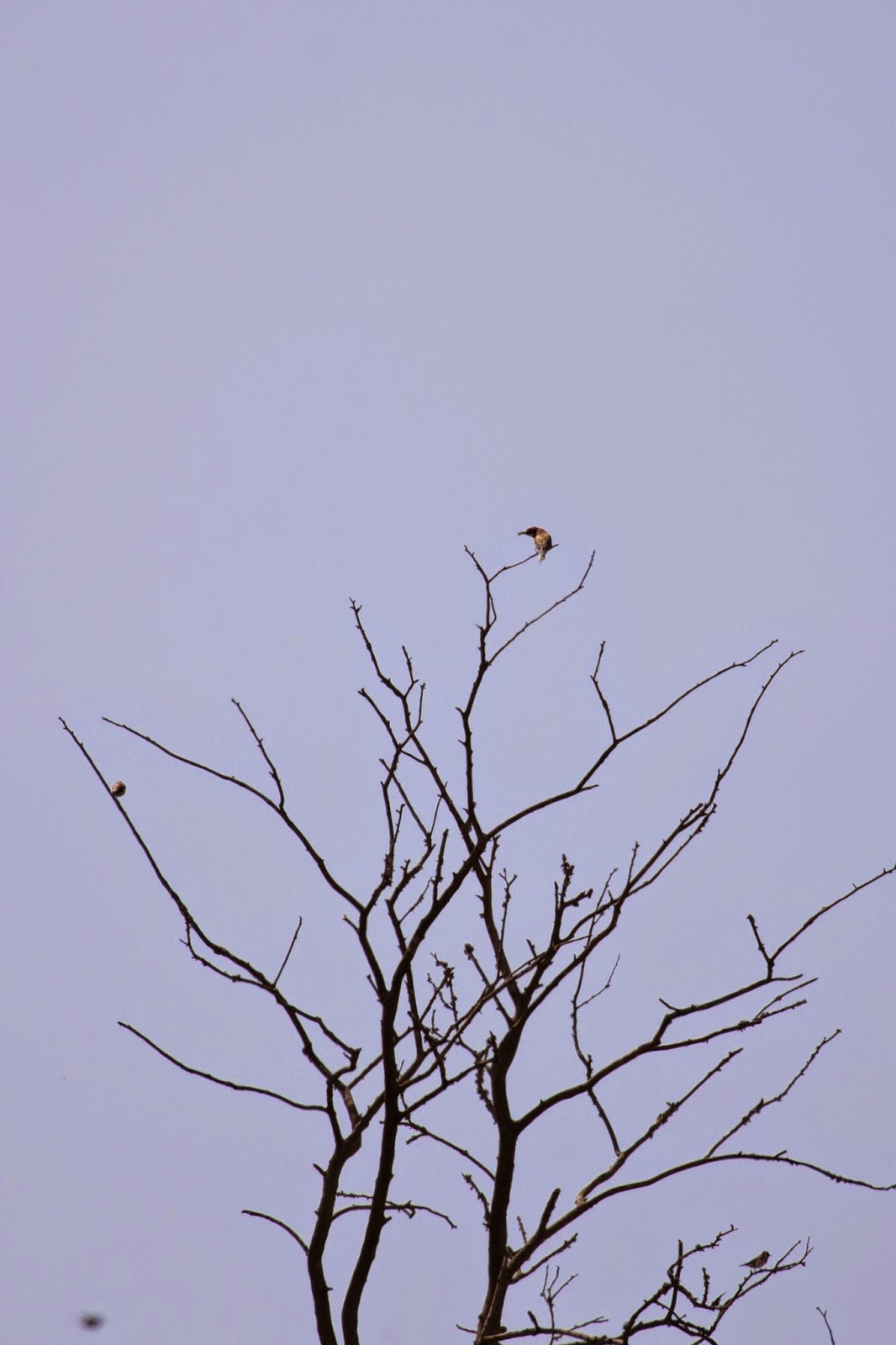 It's great that these birds are on National Trust land and the NT have been very organised about getting birders in to see them, with the location signposted off the main road from Niton to Rookley, and a car park available.
Posted by Fay at 18:58 2 comments:

I went over to Southampton, to the London Camera Exchange at Civic Centre, yesterday for a new camera bag and maybe a new (secondhand) lens as well. As it happens I left LCE with no new bag and no lens, mainly because I couldn't find a bag I liked and there were no lenses I wanted (s/h Canon 70-200 f/2.8 L). Instead, I've somehow ended up with a secondhand Canon 1D Mark III with only 6300 shutter clicks on it. I've always wanted a 1D-series DSLR but, given that new models (the latest is the 1Dx) command huge prices, they've always been out of my financial reach. The 1D3 is a bit old now, having been released in 2007, but it's still a very capable device and so far I am pleased with the results from it.
I've not seriously tried it on wild birds but here's the pup and my aunt's pet gander, Mr. G. The shots were with my 100-400mm zoom. 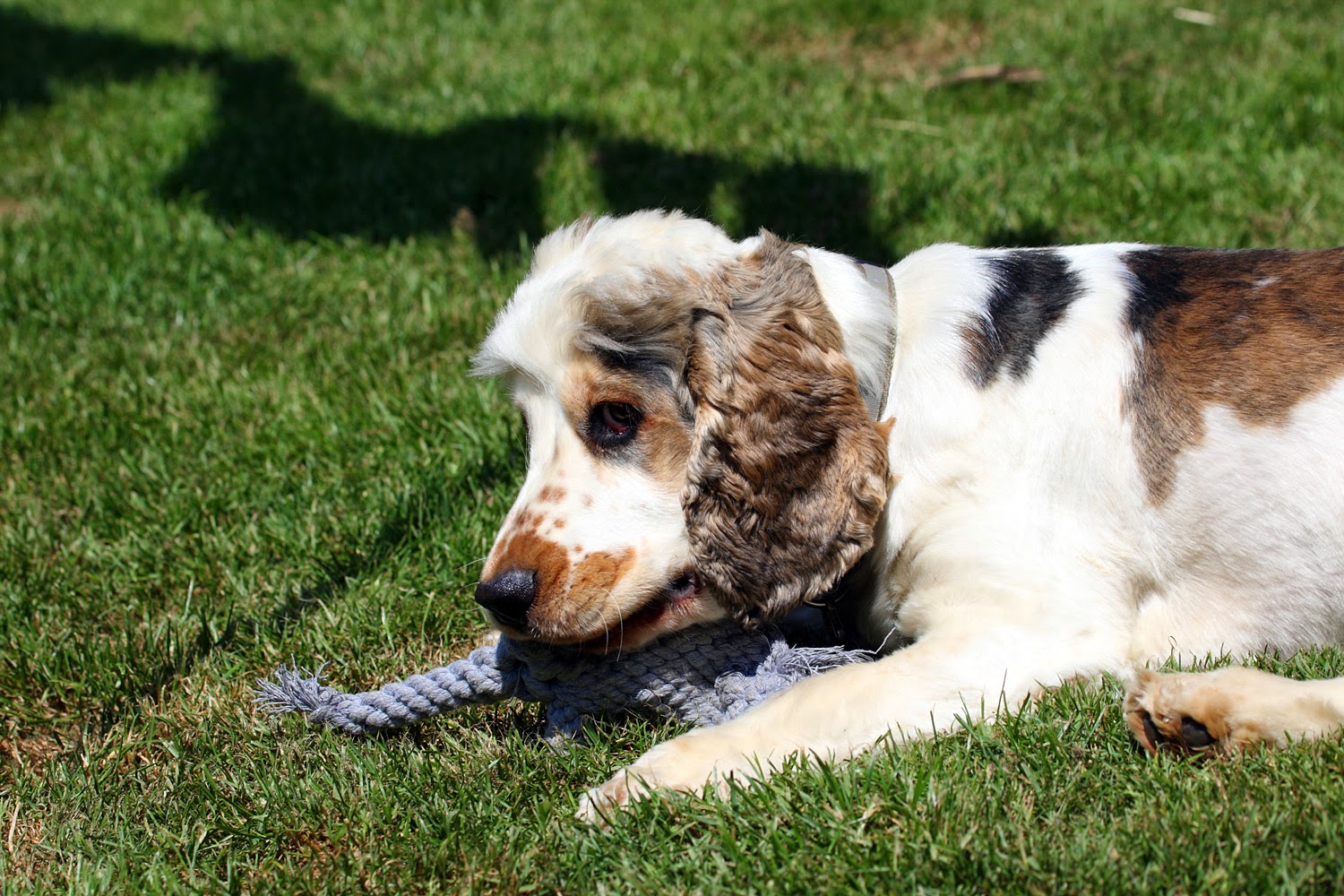 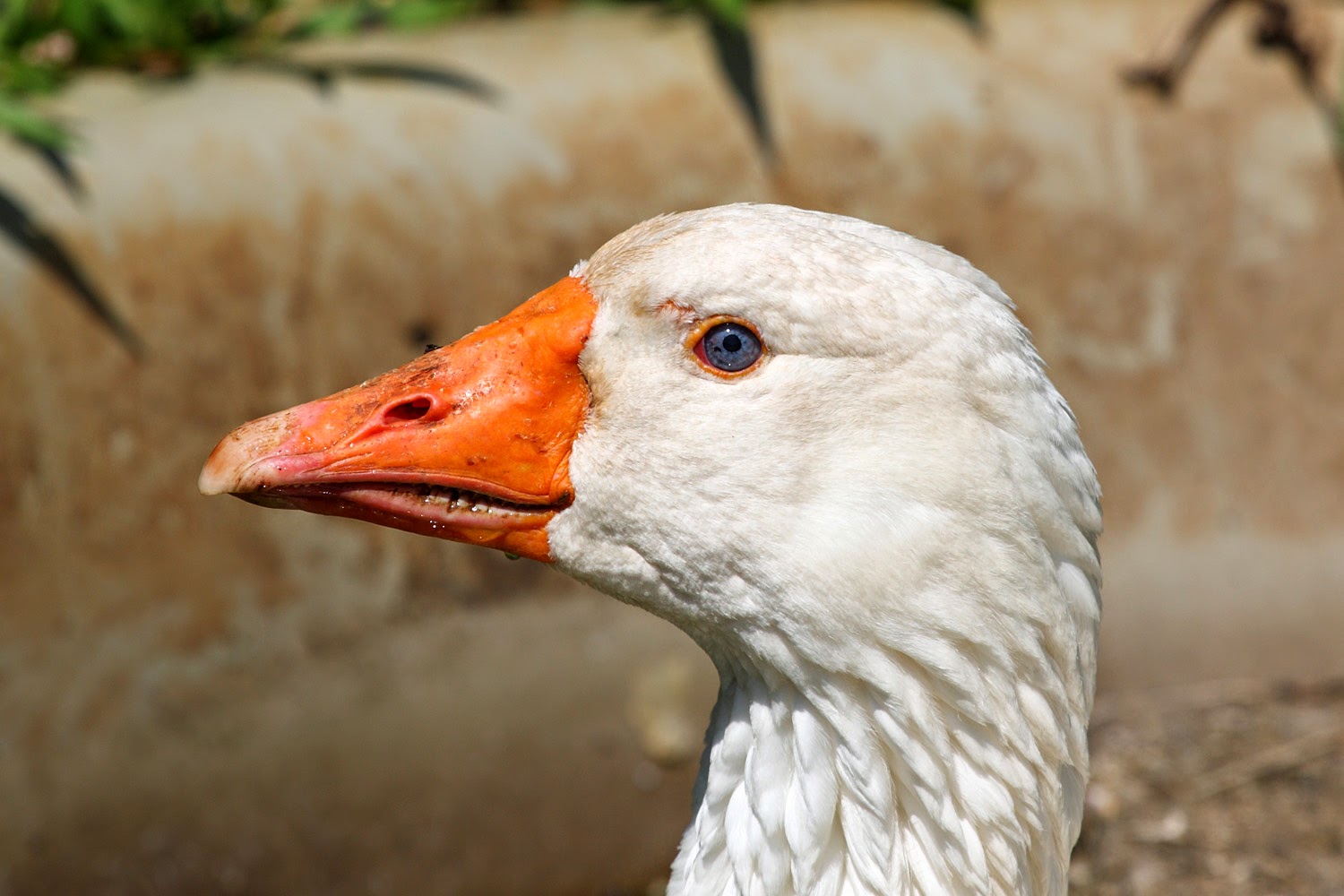 And a quick shot of Queen Mary 2 in Southampton yesterday. I always like photographing 'Her Madge' as she's an impressive ship (had the pleasure of a short cruise on her in 2012, she's fabulous, inside and out). The photo was taken with the 24-105mm zoom. 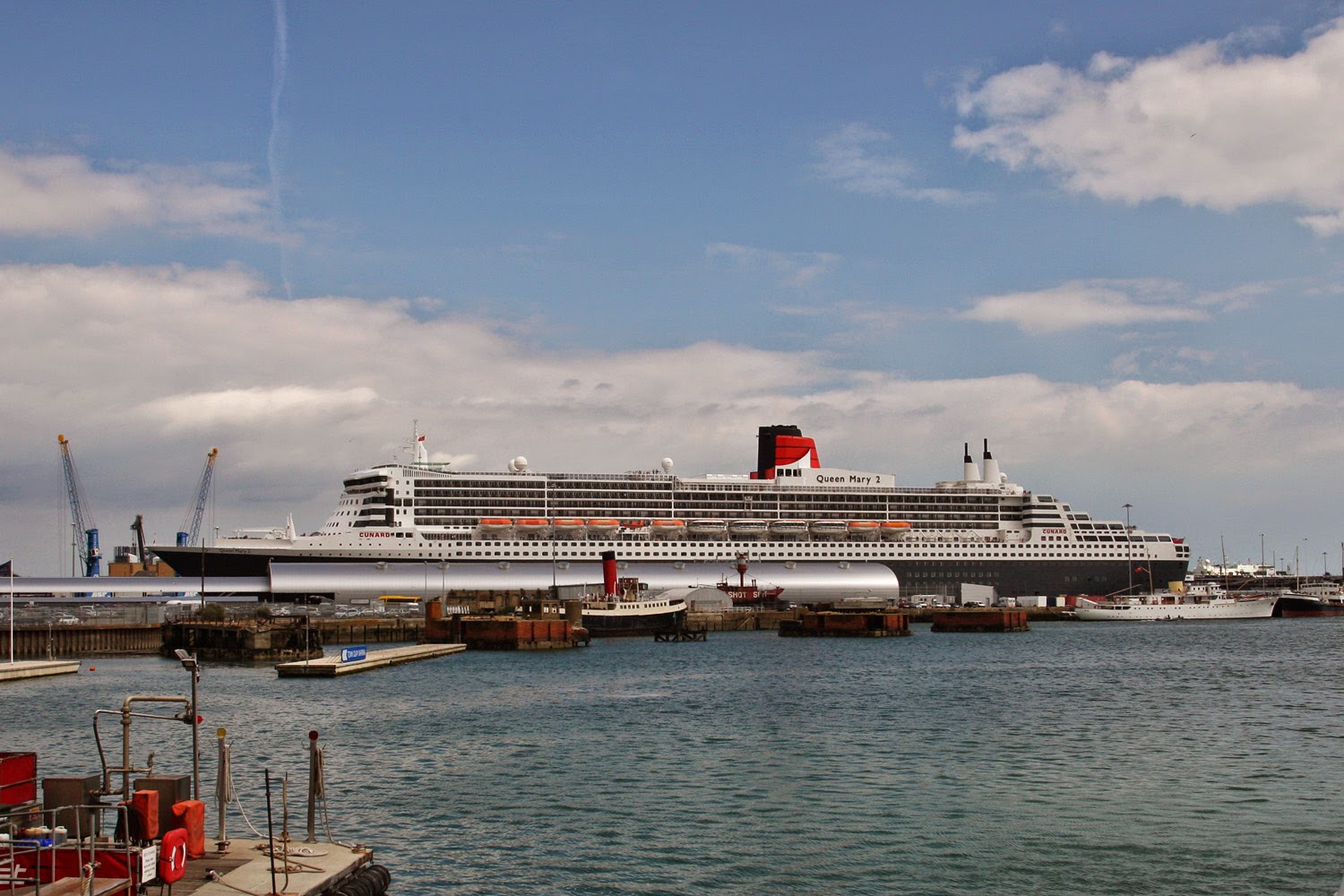 The one major disadvantage of this camera is that it is heavy, very heavy.

A Bullfinch is an unusual garden visitor. Not a crippler, definitely not rare by any means, but not that common now so it's nice to see and such a pretty bird, too. When I took the photo a few days ago it was just the male about, but yesterday he was joined by his Mrs.
Apols for bad image, it was into the evening, it was cloudy and the light - what there was of it - was going, plus I was trying to handhold my 100-400mm zoom and the ISO was set to stupid hundred. 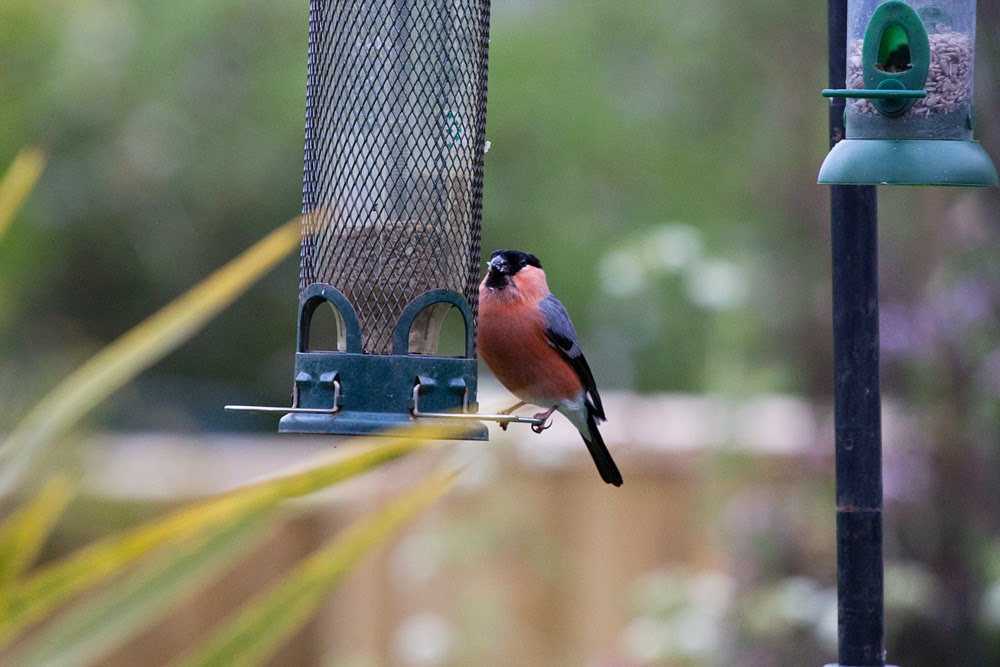 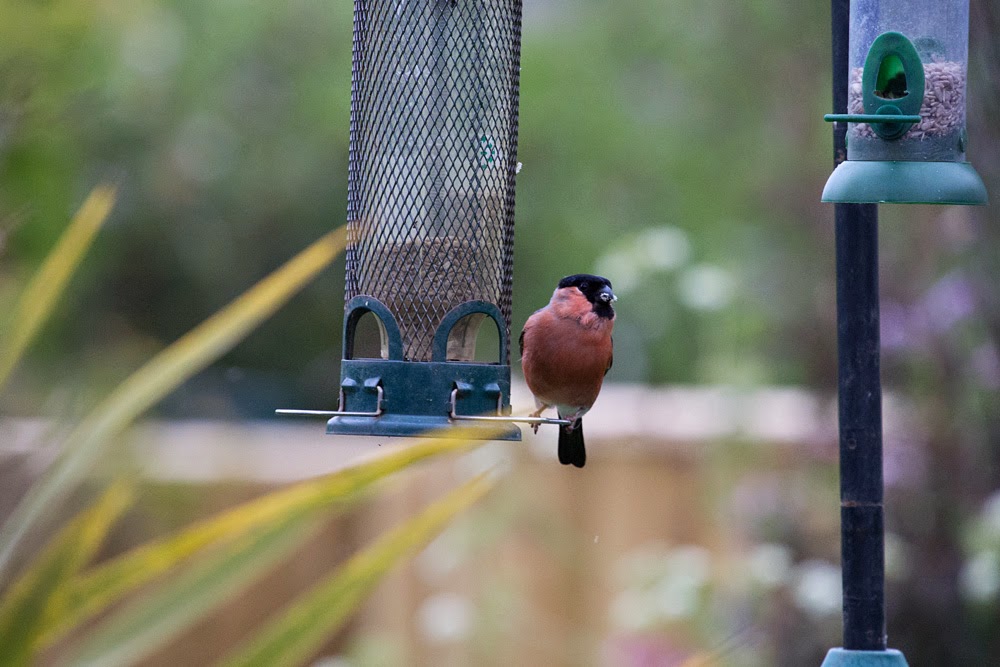 As a Southampton FC fan I am more than a tad irritated - no I'm not, I am actually completely pissed off - by the national rags trying to sell the entire first team. They ought to learn not to make stuff up and, not only that, realise that keep repeating rumours, lies and conjecture (with the occasional arse-covering reverse-ferret), won't make it any more likely to happen. Knock it off, tossers.
Posted by Fay at 17:19 1 comment:

Turnstones at East Cowes a couple of weeks ago 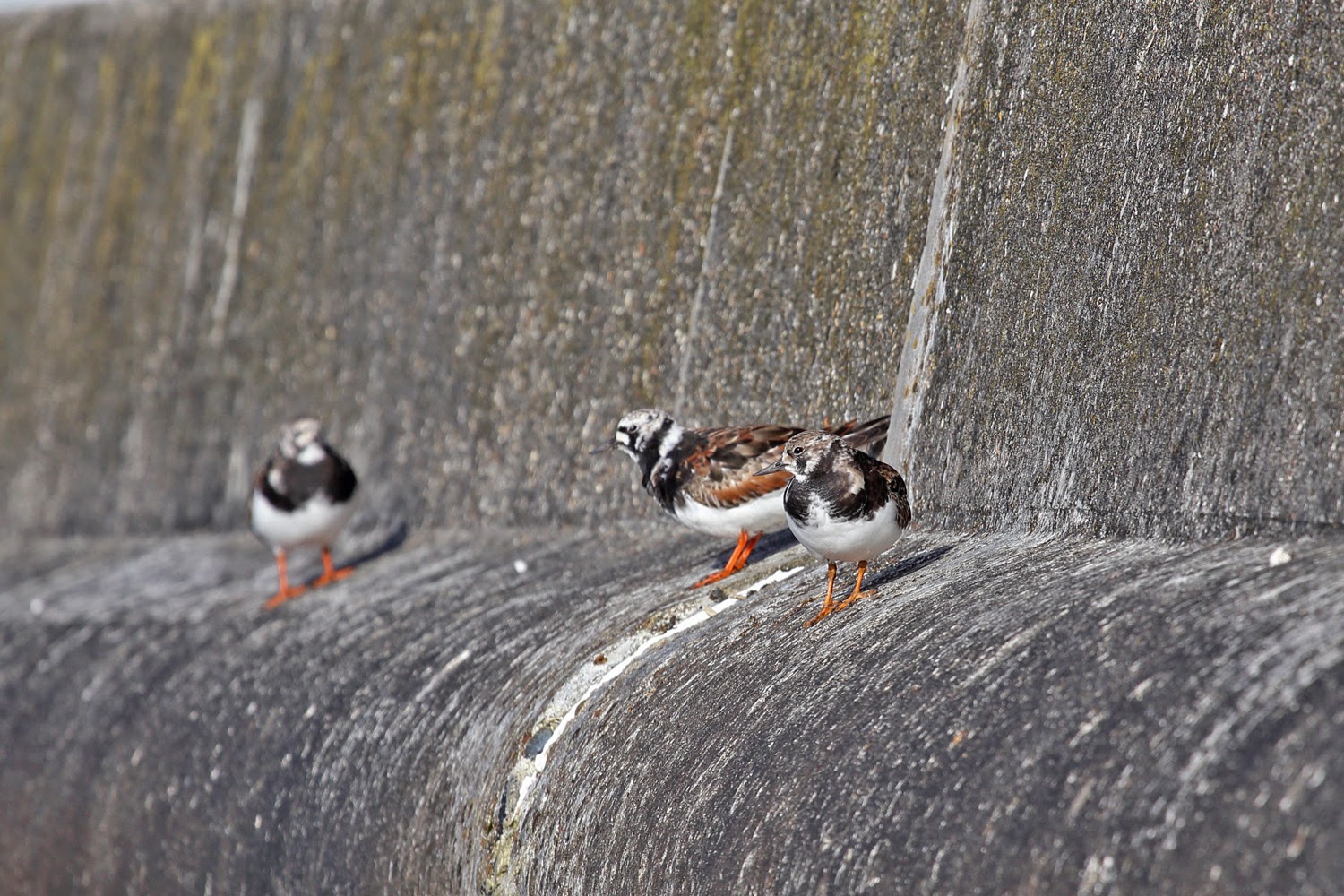 I'm back from Australia and it was a great trip, even if I didn't do as much birding as I intended (I went to an astronomy event and all-night observing meant that the days were spent not doing much, especially in 30°C heat). I will have a few photos to put on here though, once I've processed them.
Posted by Fay at 20:16 1 comment: 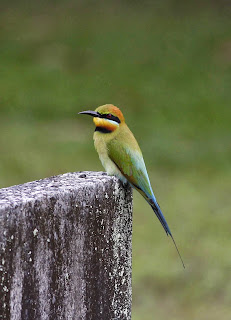 Because iPads (and, to be fair, not just iPads, tablets in general) are generally useless for everything except browsing the net, collecting email (it's happy to receive them although its ideas differ from mine about sending them), reading electronic books and listening to music, if I want to update the blog during the three weeks I'll be away I'll have to use email. Blogger doesn't have an app (why?) which would make life a lot easier and the regular browser interface is practically unusable in Safari.

I think I can add photos, so I'll attach one to the email and see what happens. The photo is of a Rainbow Bee-eater from my previous visit to Australia. I hope this works, so far the Gmail mobile site isn't great while the mobile app is plain old shite!

I am setting off tomorrow and will return home on 9th April, unless idiot politicians get us all nuked over Crimea...and the moronic willy-waving over that land-grab is getting ever more serious.

It seems as if email blogging works okay although I have to go in and edit out all the email-related crap.

NB - I've added in old imported posts from my old travel blog, these relate to my previous trip to Australia and SE Asia and can be seen under '2009' (links on right). The formatting's a bit screwed but I'll sort it out at some point.