I am finally getting round to writing and posting accounts of my travels from over the past ten years. You can see the relevant pages at the top, under the banner. Yeah, the photos aren't award-winners by any means...

Very stormy again. More wind, more torrential rain. This is tedious. Returning home from the hospital where I was visiting my mum this afternoon and the roads were rapidly flooding again. These are rubbish iPhone shots as we drove back towards home (no, I wasn't driving!). 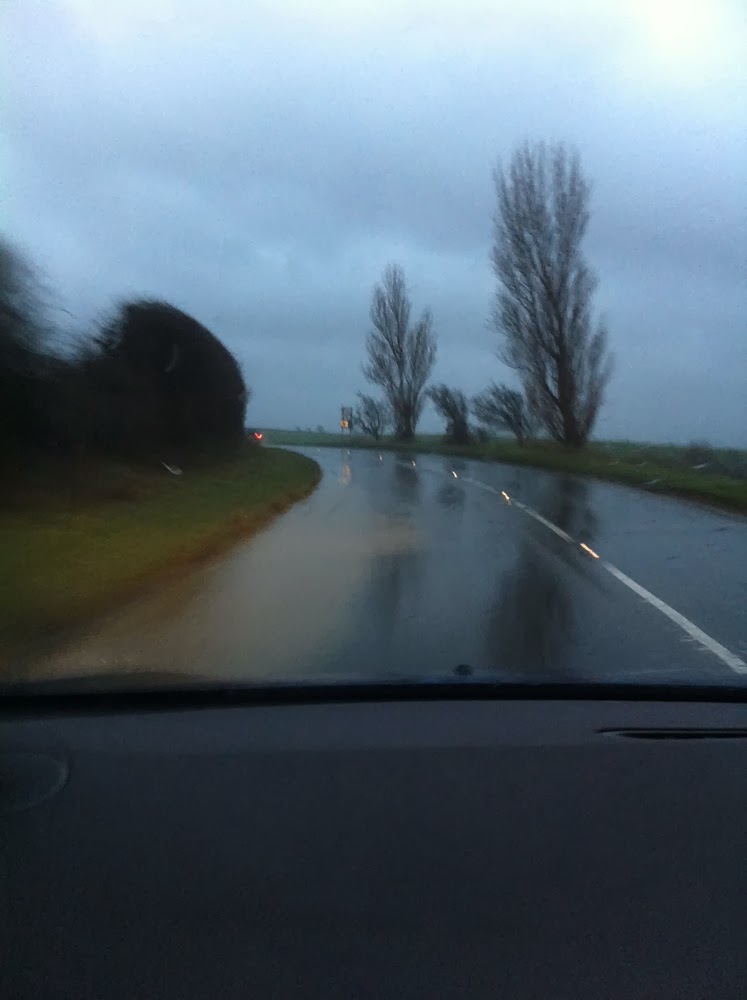 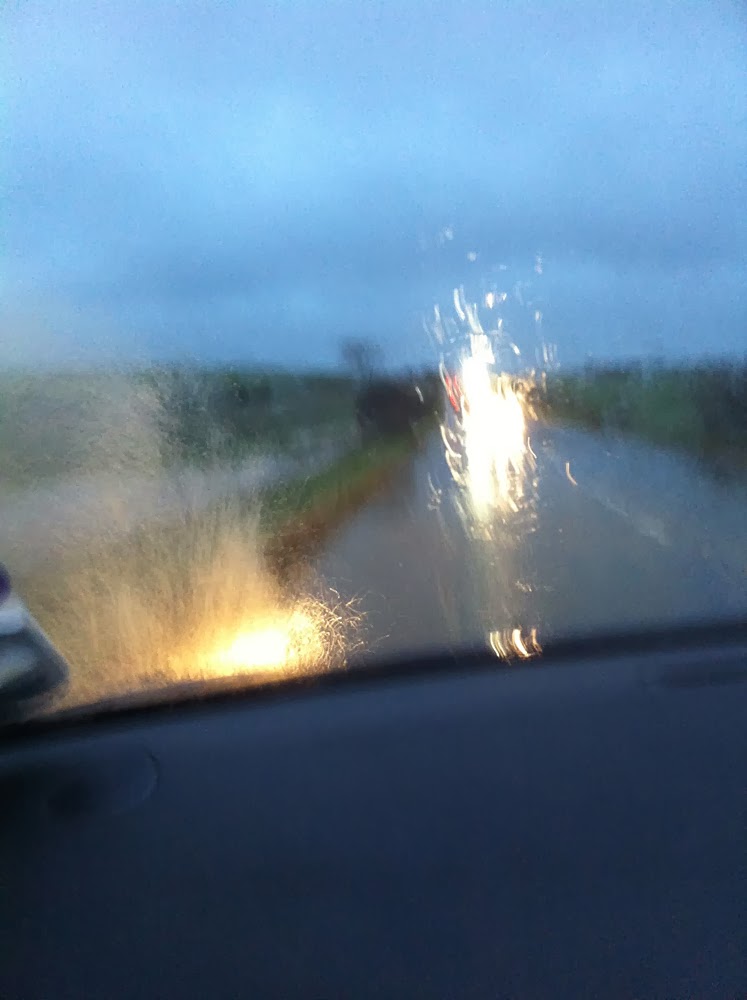 It had stopped raining for at least one day today so I headed for Ryde and Seaview for a spot of seawatching. As I was driving through Newchurch I changed my mind and decided to head to Fort Victoria to see if I could spot the Glaucous Gull which had been seen there during the week, despite it not having been seen since Thursday.
I saw plenty of Black-headed Gulls, a couple of Mediterranean Gulls, four Great Black-backed Gulls, a Great Crested Grebe and a Guillemot but no Glaucous Gull. I met a couple of other birders one of whom, Ian, said it'd had appeared to be sick so, unless it's still around but not in the immediate vicinity, it's either moved on or it's snuffed it.

At Yarmouth estuary and ponds, there were plenty of Wigeon, by far the most numerous birds, Teal, Curlew, a solitary Mute Swan, Black-tailed Godwits and a pair of Gadwall. The gulls were mostly Black-headeds (still no Glaucous!). At the scrape were a Greenshank and more ducks. Bird of the day though, was a distant female Hen Harrier, a bird I've not seen for a long time. 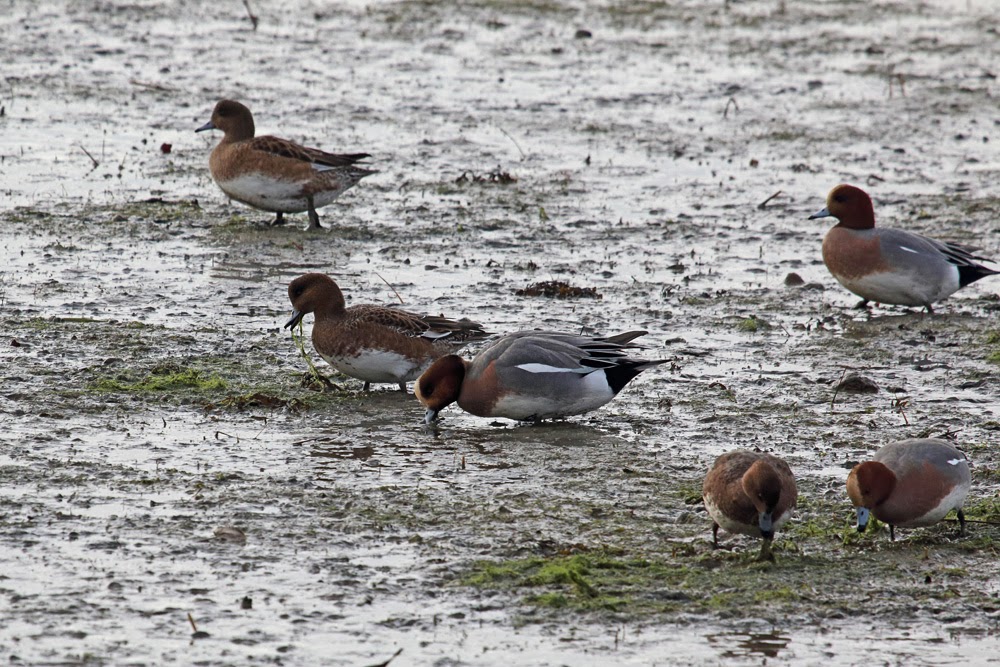 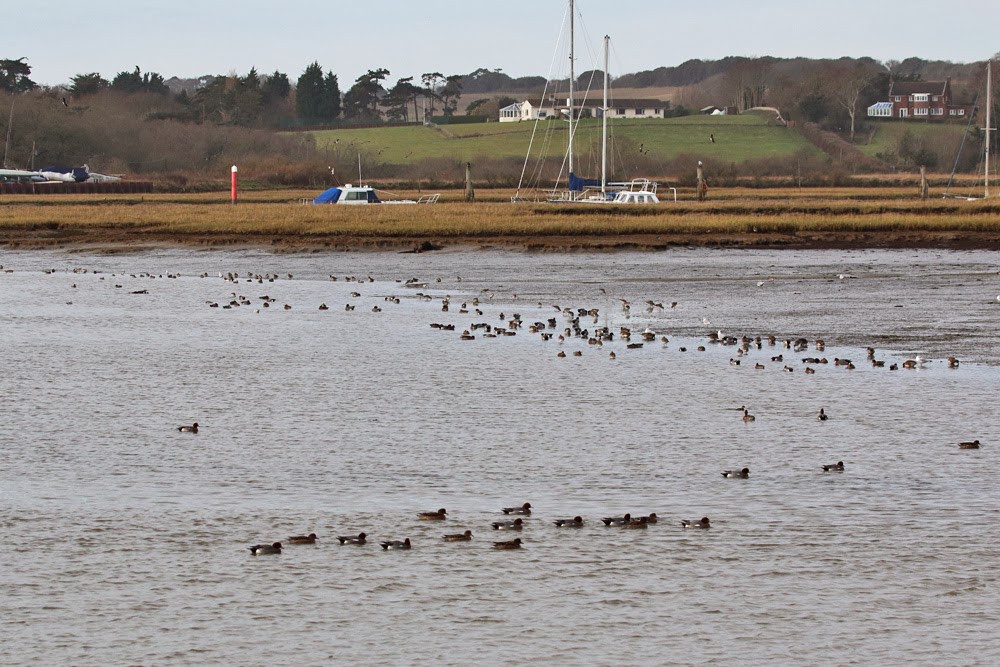 It was nice to meet Steve, who writes the blog The Wild West (he found the Glaucous Gull last week), as well as another local birder, Ian.

I don't know if the gull will ever reappear although I'll keep an eye on the relevant websites. The forecast is appalling for tomorrow and I am back at work on Monday so, if it does turn up again between Monday and Thursday, it'll go unseen by me.
Posted by Fay at 16:50 1 comment:

It was another filthy day in this unusually (even by UK standards!) wet winter. I went for a two hour walk to the next village, Newchurch, and back, the drizzle barely stopped and there was liquid mud underfoot. I did manage to see a few birds, the best of these being Redwings, Fieldfares (two of my favourite winter visitors) and a large Goldfinch flock in trees behind the church.

I didn't take my camera with me, as I thought there was no point in the rain and horrible conditions, so the following pix are crappy iPhone photos.

Hazel catkins are an early sign of spring, although that's still a couple of months away. Great Tits were also singing. 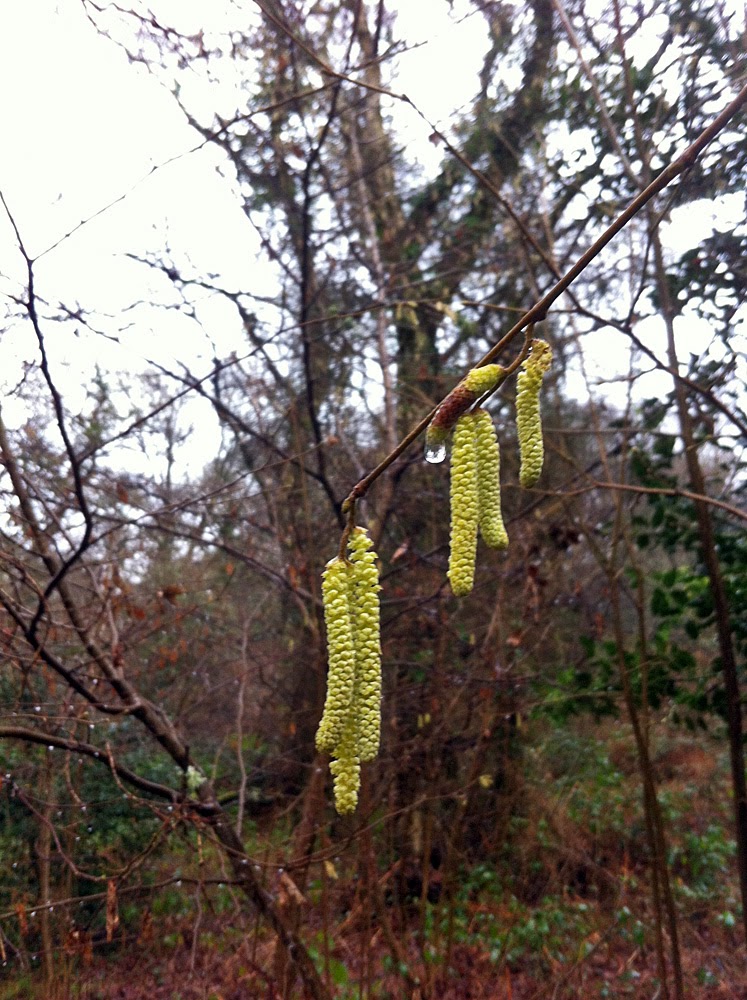 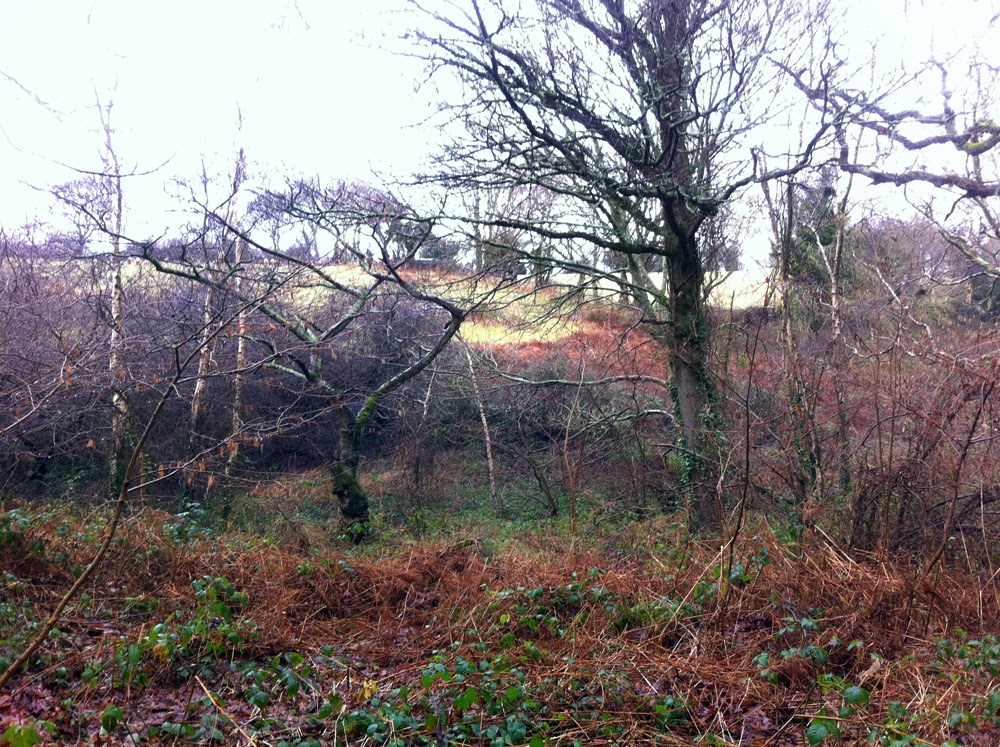 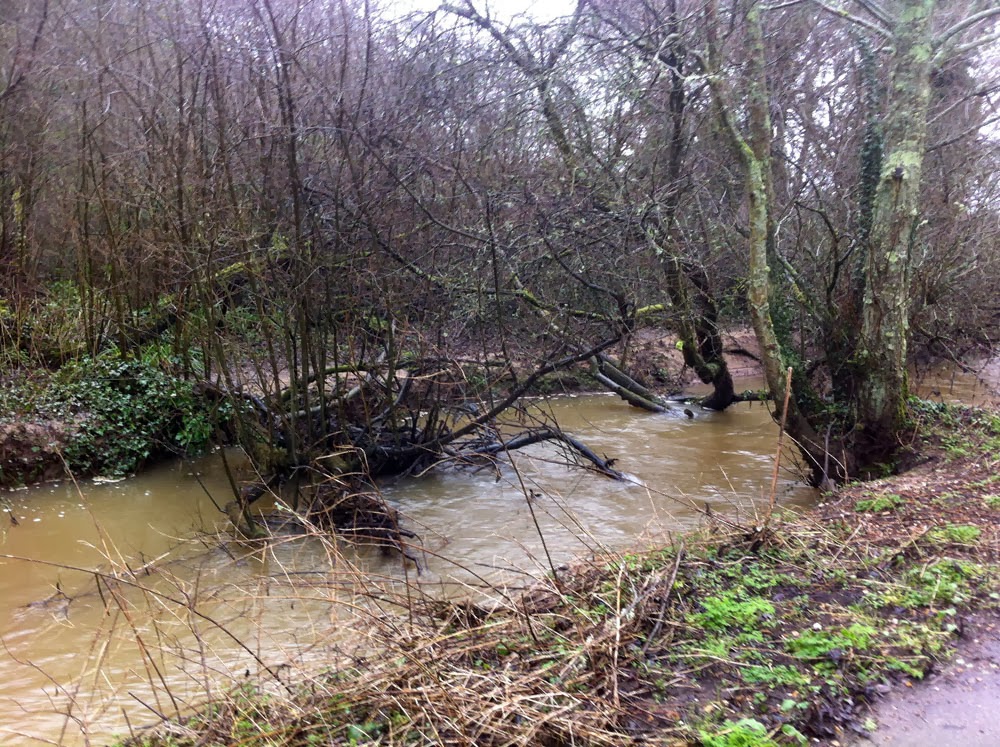 Flooded ground by the river 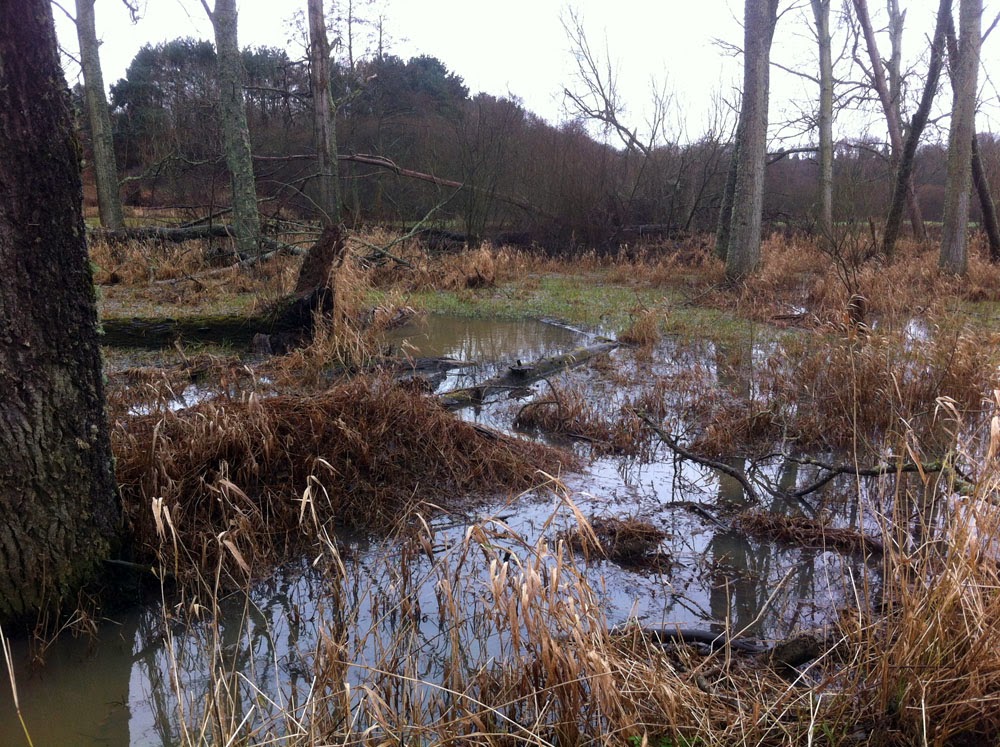 Path up to the church from the main road which goes through the village. While not in a 'granny-stopper' category, this is a lot steeper than it looks in the photo. 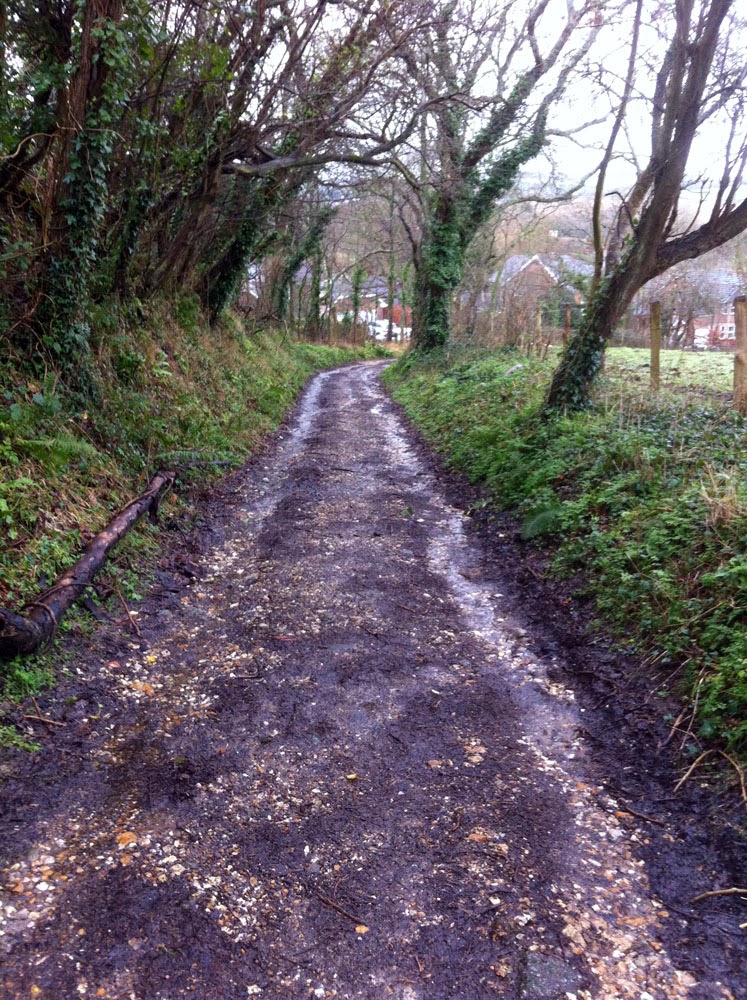 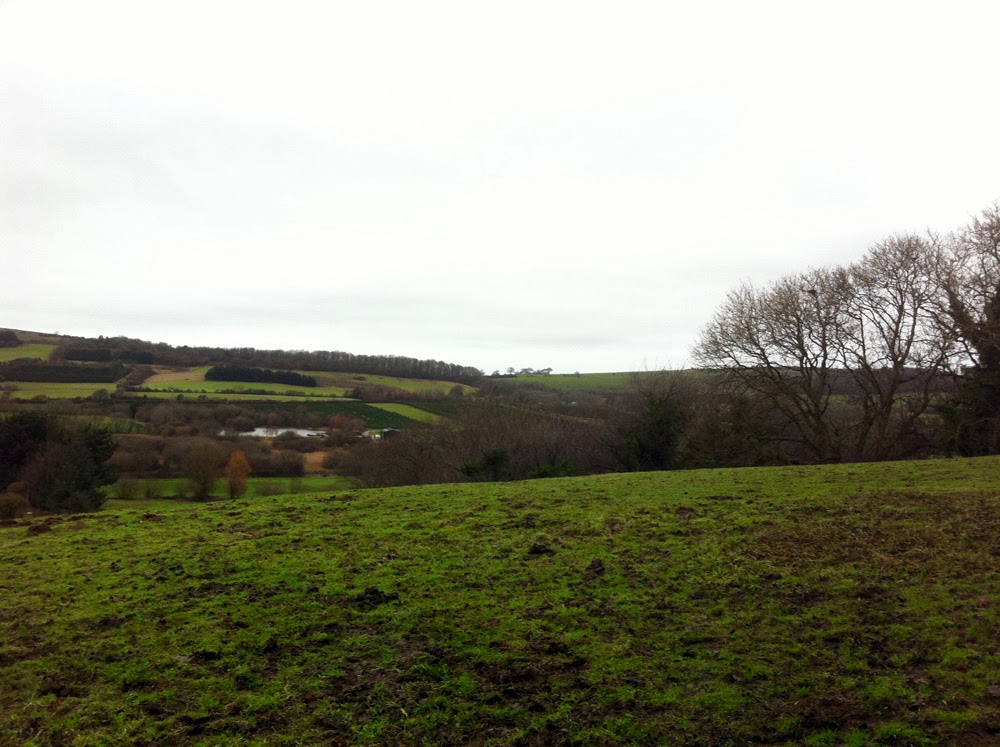 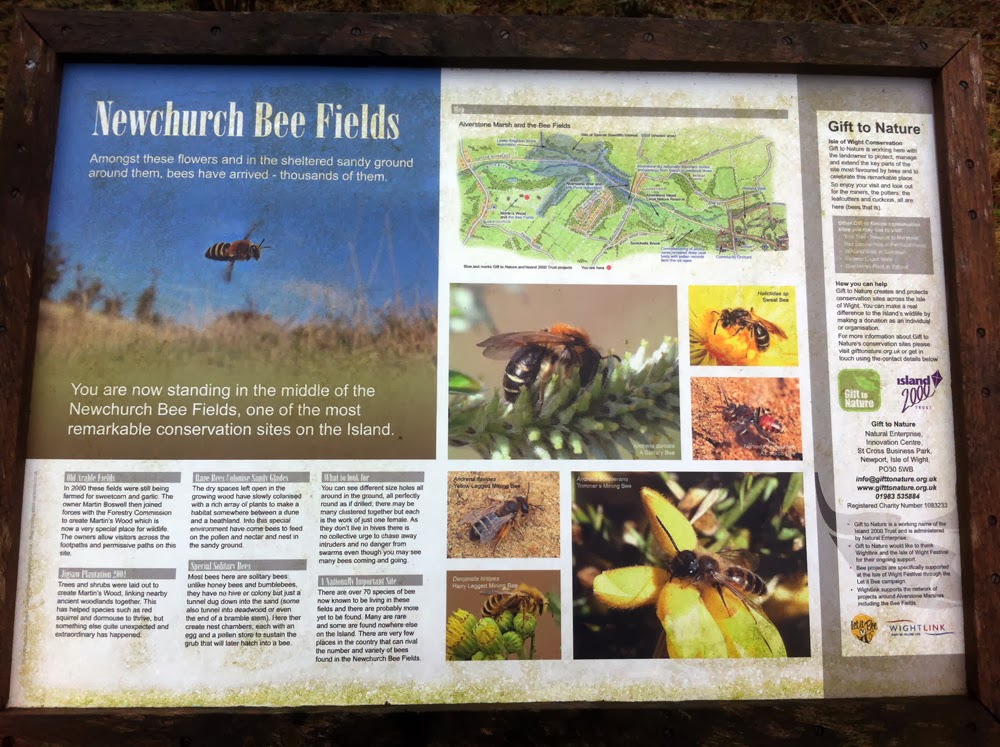 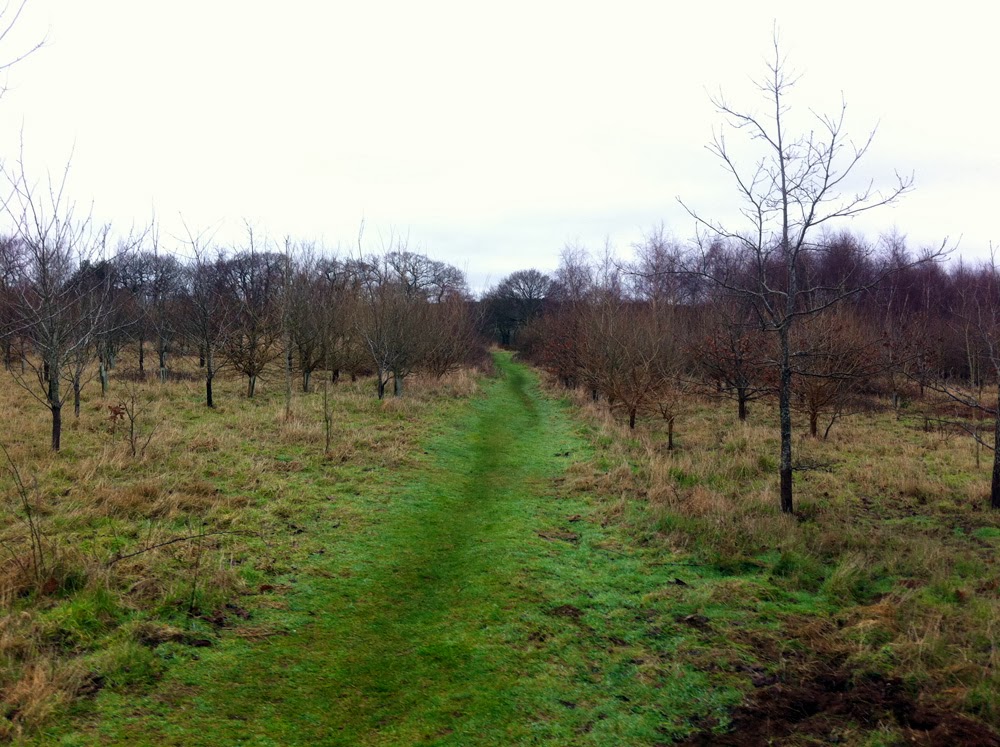 The people who maintain the local footpaths have attempted to tame at least some of the mud by putting bracken and straw down on it. This has only been a partial success. 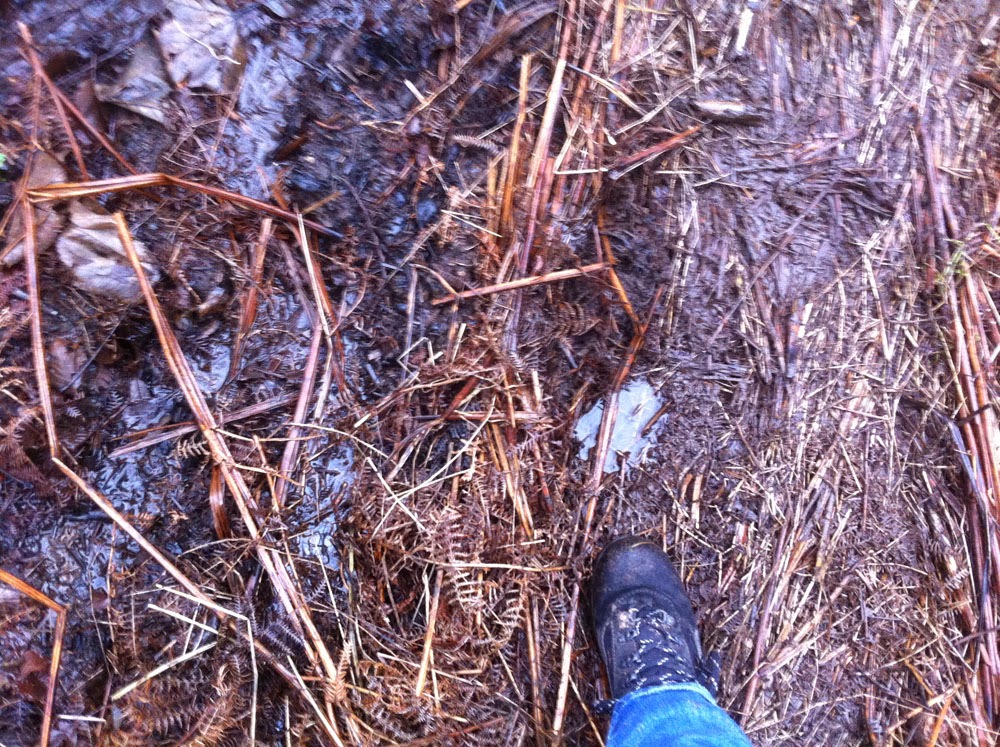 The two-hour walk highlighted how unfit I am. I was reasonably fit until the end of 2012 when I injured my hip in a surfing accident (I've had to give up completely) and then slipped a disc in my neck a couple of months later. The exercise went down, the alcohol consumption went up...no, I am not fat, fortunately, just very unfit, even though my job is not entirely sedentary. However, I didn't think I was too bad, until I was knackered after a two-hour walk...I don't think I'll be going to the Himalayas any time soon!

Tomorrow's forecast is better, with some sunshine predicted. I'll probably head to Ryde and Seaview.
Posted by Fay at 20:26 1 comment:

A rare bright sunny day in a mild, wet and often stormy winter, so it was off to St. Helens Duver, an area of sand dunes in the NE of the Isle of Wight, one of the few places that, although wet, wouldn't be knee deep in mud. A lot of the island has been flooded in the past couple of months and parts of roads badly damaged or even washed away.

The landscape photos were taken with my Canon 6D and 24-105mm lens while the bird shots were with my 70D and 100-400mm, at ridiculous distances and cropped. 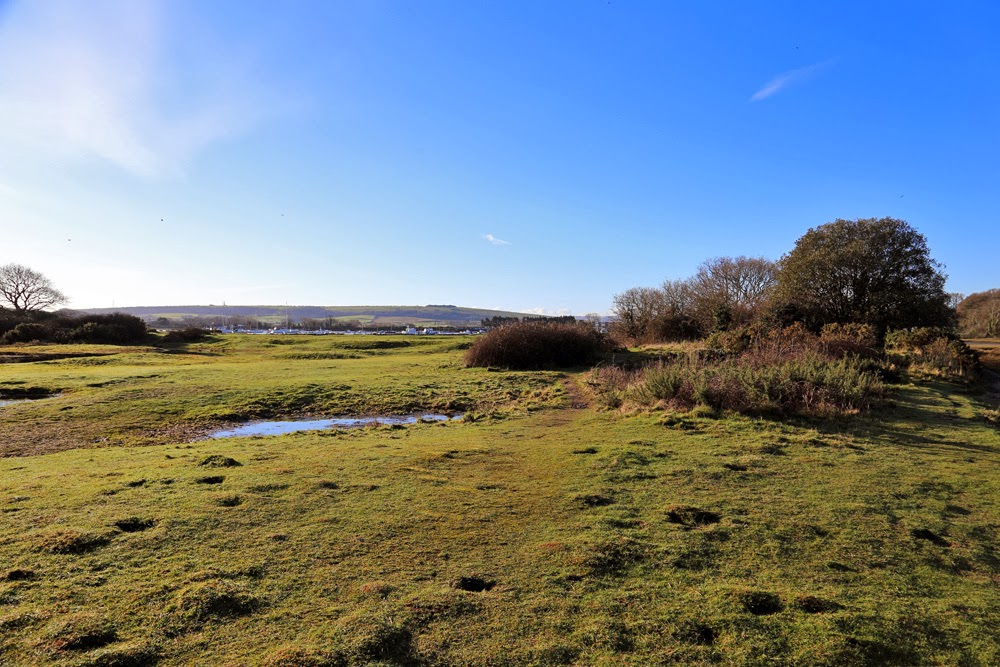 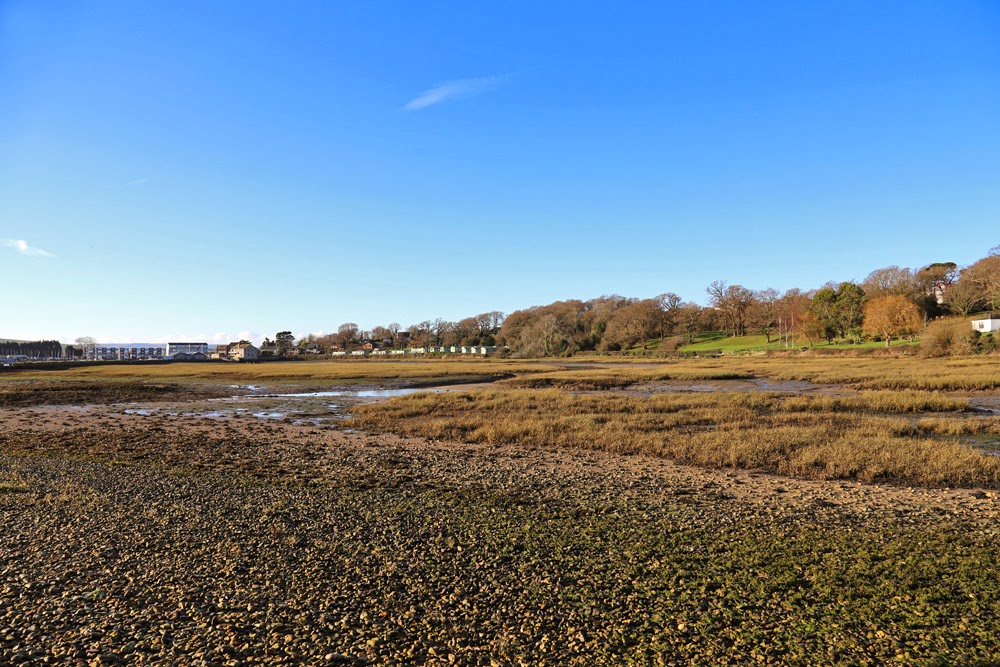 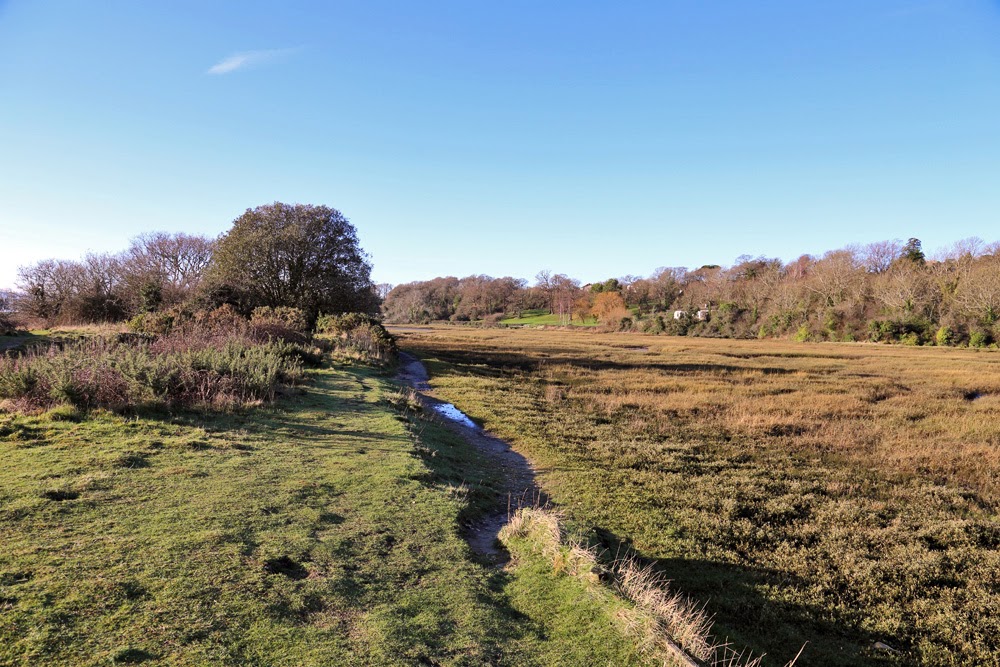 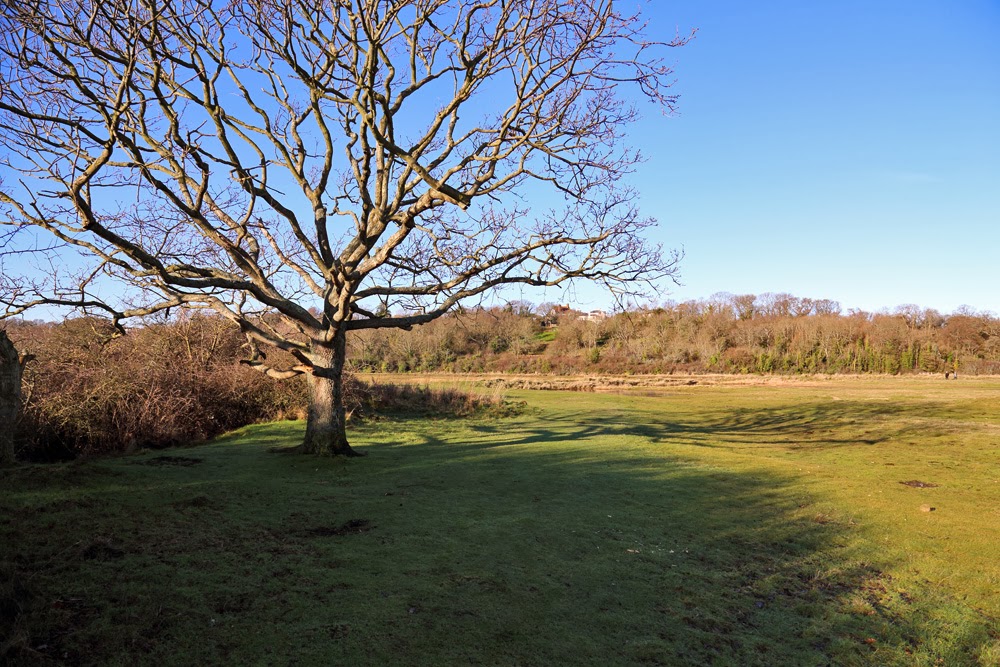 There were a few birds around, mostly the usual stuff including Robin, Wren, Carrion Crow, Magpie, Blackbird and Pied Wagtail. A Rock Pipit was on the shore by the lagoons. On and around the lagoons were Little Egret, Teal (approx. 20), Redshank, Oystercatcher, Lapwing, Black-headed Gull, Herring Gull, Great Black-backed Gull, a couple of Cormorants, Grey Plover. Flocks of Brent Geese flew in from the west. 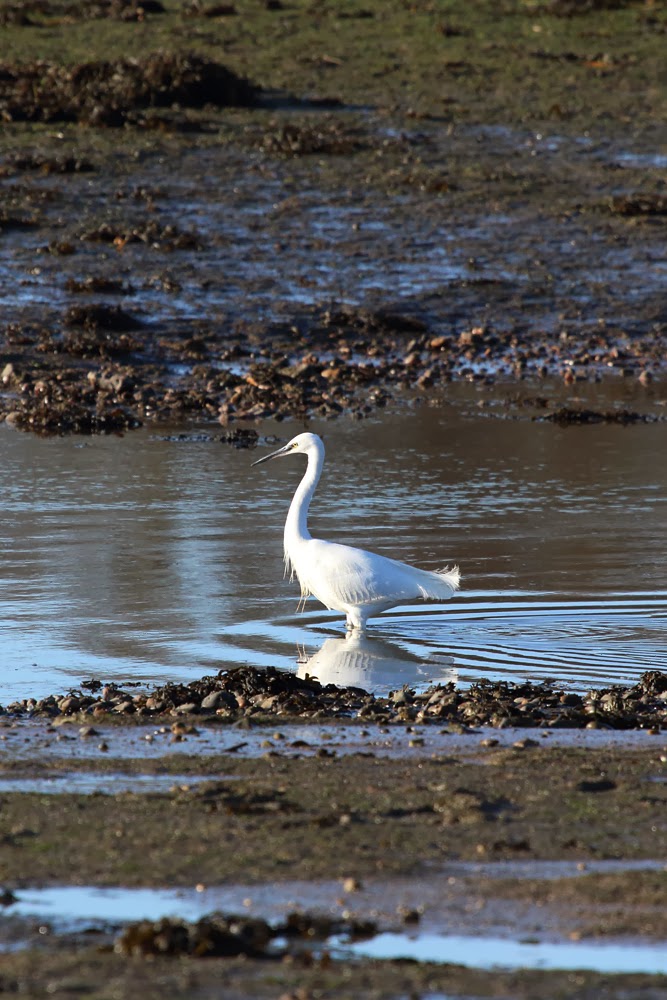 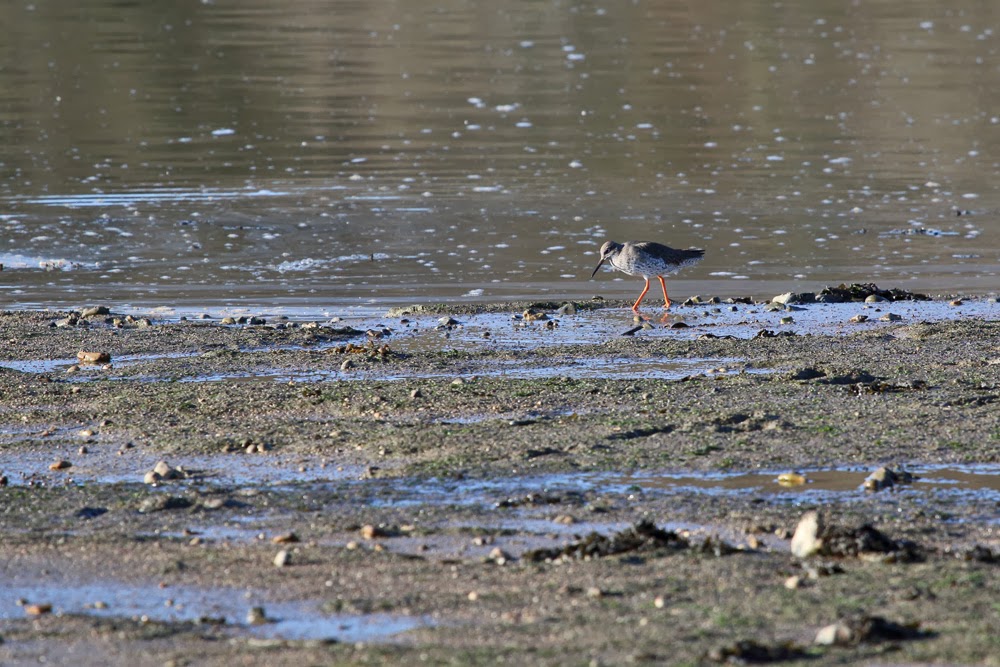 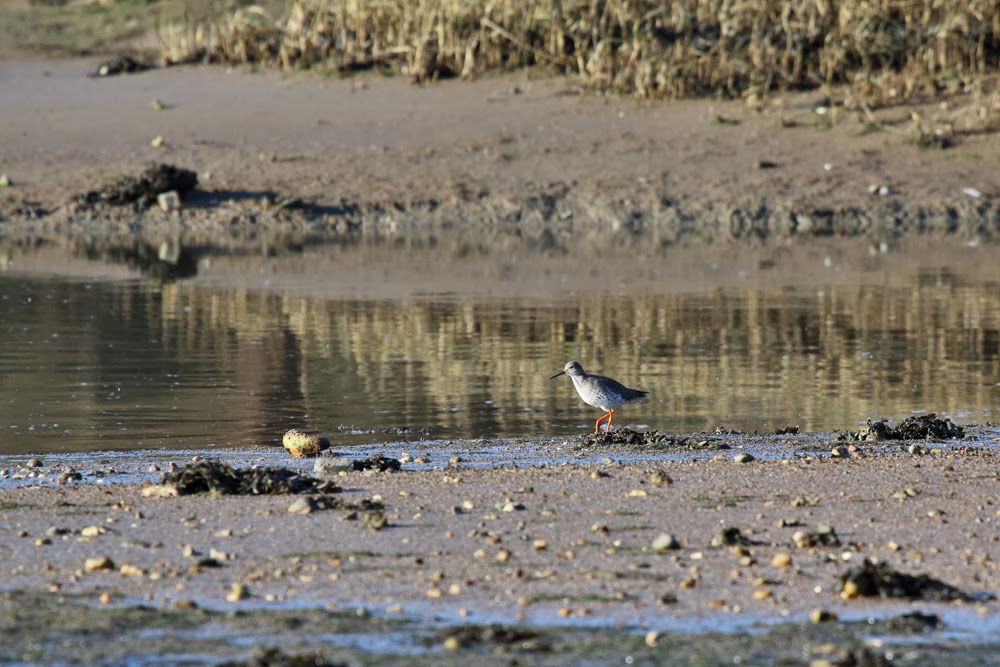 Over in the distance, the other side of St. Helens and Embankment Road, something disturbed the birds and the sky was soon filled with agitated swirling flocks of geese, ducks, Lapwings and gulls. I couldn't see what it was that had frightened them but it could have been a Peregrine, Buzzard or even a Marsh Harrier.

I had a moment of madness last week and decided to take out a bank loan to buy a Canon 500mm lens. The bank approved it, as I have almost paid off my existing loan with them, and sent me the papers to sign, but I've realised that it is incredibly stupid to get into debt to just blow money on something which costs as much as a new car, which I can ill-afford and which won't improve my photography anyway (getting closer to birds with my 100-400mm is the key, as is technique). So, I've chickened out and decided I'm not going to take out the loan after all, because adding another seven years onto my existing loan is not the most sensible idea. I'll save for a second-hand 500mm prime or I might look at the new 150-600mm Tamron which has just been released, which is exciting the photography community (initial results from it are promising) and which I can afford.
To be honest, thinking about it, I'd rather spend money on travel. I am not exactly paid badly but it is often a case of 'either/or'. I'm off to New South Wales (Australia, of course!) for a couple of weeks in March/April and I am thinking of a trip to Nepal later this year or next.
Posted by Fay at 18:03 No comments:

I am still here, life had caught up with me big time during 2013 with family problems (my mum got seriously ill and nearly passed away), other problems and a new job. I'd not been out birding since the Bluethroat back in March! Hopefully 2014 will be better!

This year I am going back to Australia for three weeks in March and early April although, this time, I won't be stopping off anywhere, this is a straight out and straight back trip. Obviously I am planning to do some birding and photography while I am out there which, of course, will appear here. I am hoping this trip will be more of a success than my last one in 2009 was...while it was not a complete disaster, it wasn't entirely successful either.

Forest Kingfisher, from my 2009 Australia trip 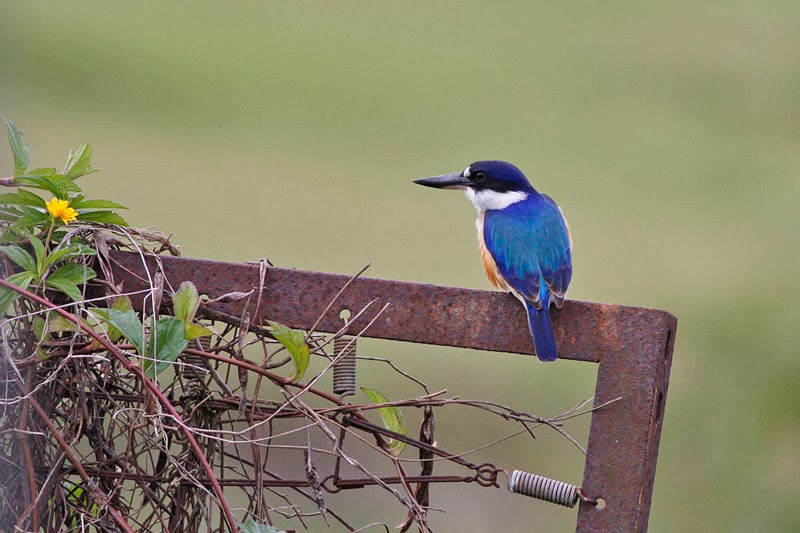 In addition to my Canon 6D I've got a 70D which, as it has an APS-C sensor, will be better for birding. However, I think most of my photos will be more for blog illustration purposes rather than pure photography, we'll see. That said, I'll always try to take the best photos possible but I think I've got a bit discouraged by websites with cracking close ups of rarities and common birds alike, all taken on Canon 1D-series cameras and 5/600mm telephoto lenses which cost as much as a decent second-hand car and which completely blow my efforts from the water. Yes, I have got a bad case of 'lens envy'!
I am also going to try to get back into doing a bit of sketching.

I've not renewed the hosting for my website because it was a pain to maintain but I am planning to get a new Flickr site, which I'll put all my old - and new - photos on.
Posted by Fay at 20:13 No comments: